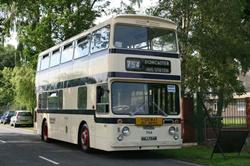 754 was the last bus delivered to Sheffield Transport Department before that undertaking became part of South Yorkshire Passenger Transport Executive in 1974. It has the reliable and well-respected Gardner 6LXB engine, driving through a fluid flywheel and 4-speed semi-automatic gearbox.

It was fitted from new with a Videmat ticket machine. The passenger placed the exact fare into the machine and received a photo of the coins as proof of the fare paid and boarding point. The Videmat system was abandoned in Sheffield in December 1984.

754 had a fairly short service life of only 11 years, being withdrawn around the same time as Videmat. It was immediately bought for preservation and  for a number of years was a regular performer on the Museum's Isle of Axholme tour. It is currently awaiting work on the chassis.