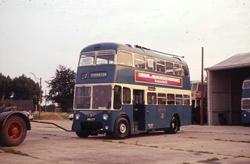 This was the last vehicle of a batch of three, which turned out to be the last trolleybuses delivered to the Mexborough & Swinton company. Originally they carried centre-entrance Brush single-deck bodies. After the M&S system closed in 1961 the three together with another four similar vehicles were sold to Bradford Corporation.

The intention had been to extend the chassis to allow new 70-seat forward entrance bodywork to be fitted but with a new manager that year Bradford's policy towards trolleybuses changed. Consequently the chassis although rebuilt were not lengthened, nor were they fitted with automatic acceleration control as was standard in the Bradford fleet.

847 re-entered service with its new East Lancs double-deck forward-entrance body on 1 March 1963 and was the last addition to the Bradford fleet. It is awaiting restoration and is on permanent loan to Keighley Bus Museum.