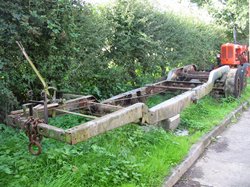 By the standards of the various now-defunct trolleybus systems in the United Kingdom, the Nottingham system was a medium-sized one, with a total of 8 routes, and a maximum fleet of 157 trolleybuses. It was closed on 30 June 1966.

Nottingham was also served by another system, the Nottinghamshire and Derbyshire trolleybus system, which was in operation between 1932 and 1953.

Six of the former Nottingham system trolleybuses are preserved. Four of them are at the Trolleybus Museum at Sandtoft, Lincolnshire, England, and the other two are in a private collection in Nottinghamshire.

The Chassis is all that remains of Nottingham 46 which was delivered in 1931 and bodied by Ransomes, Simms & Jefferies. They were three axledD6 stypes., but it is on display in the open air at the Museum.