Prefabs were built in large numbers all around the country in the late 1940s and early 1950s to quickly and cheaply replace bombed-out housing after the war and satisfy the escalating need for cheap housing in the post-war boom. There were various designs of prefab, some using timber framework and asbestos-cement cladding, some with steel framework and asbestos-cement cladding and some made of prefabricated concrete sections; some had asbestos-cement roofing and some had sheet steel roofing. They had a design life of only 15 years, but it is great credit to their design that you can find some of these still standing! Town redevelopment swept many of them away, particularly in the 1960s and 1970s, but the Museum acquired two of the concrete-section Tarran-style prefabs in the 1970s and re-erected them at the Museum. One is now used for storage, but the other (once sited in Leighton Buzzard, Bedfordshire) has been partly kitted out as a post-war bungalow. We have a living room, bedroom, kitchen and bathroom for visitors to view. Many items here date from the 1950s - a period of dramatic change when many new consumer goods became available - but in line with the hand-me-down philosophy prevalent at the time, some items of furniture date from before the war. 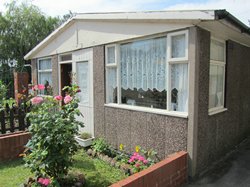 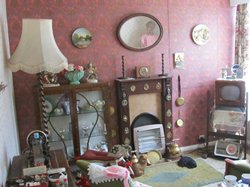 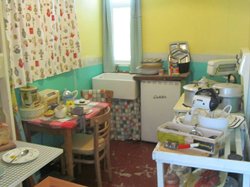 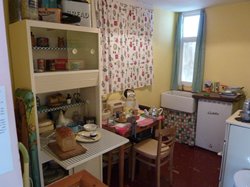