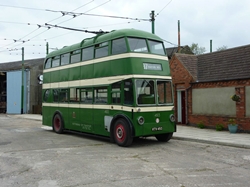 The Nottingham trolleybus system opened on 10 April 1927, gradually replacing the city's tramway network. By UK standards it was a medium-sized system, with a total of 8 routes and a maximum fleet of 157 trolleybuses. It closed on 30 June 1966.

Six Nottingham trolleybuses are preserved: four at the Trolleybus Museum at Sandtoft and the other two in a private collection.

493 is an example of the popular BUT 9611T chassis, based on the AEC Regent III motorbus. The Roe bodywork incorporates that company's straight staircase.

When new, 493 was exhibited at the 1948 Commercial Motor Show in London and as usual with Show exhibits featured many special fittings to showcase the respective manufacturers. These included polished kick-plates on the stair risers, chrome-plated windscreen frames (those on the other 12 buses in the batch were painted) and British Thomson Houston automatic acceleration control; the most novel feature was its fluorescent lighting. This also appeared on a Leyland motorbus for Oldham Corporation on the Roe stand that year but was not fully developed at that stage and was subsequently removed from both vehicles.

493 spent most of its operational life on services 40 and 47 between Wilford Bridge and Wells Road. Withdrawn in 1965 it eventually made its way to Sandtoft and is occasionally used on our Trolleydays.