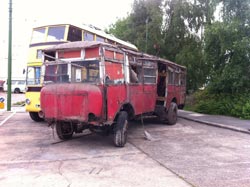 34 to 39 entered service in early 1928 when the section of tramway between Mexborough (Montague Arms) and Denaby was converted to trolleybus operation.

34 survived in service until the end of the second world war whereupon she was pensioned off and became a hay store on a farm. This single-decker was found back in 1974 by enthusiasts who bought it from the owner. 34 was towed the short distance to Sandtoft and is regarded as a major restoration project.

The Society has launched a project to restore our oldest trolleybus. Please see the B.T.S. home page for further details. https://www.britishtrolley.org.uk/

The vehicle is stored at the rear of the depot at the Museum, and can be viewed when accompanied by a member of the Museum staff.