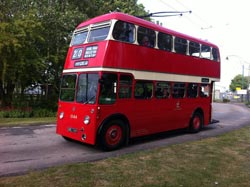 Between June 1955 and March 1956 a total of 62 B.U.T. 9612T trolleybuses with Burlingham H32/28R bodywork were delivered to the Rochdale Road garage in Manchester. Numbered 1301 to 1362, these vehicles were purchased to replace a number of pre-war trolleybuses which had reached the end of their lives. These were the last new trolleybuses to be purchased by Manchester Corporation.

Even before 1301 – 1362 had arrived, the future of the system had been determined and abandonment had commenced when the Moston routes were converted to motorbus operation (Route 212 in April 1955 and 211 in August 1955).

1344 was delivered to Manchester Corporation on 24 November 1955, entering service on 1 December 1955. It was one of a few of this batch allocated to Hyde Road garage from new, the majority being allocated to Rochdale Road depot until finally in 1956 the entire batch were operated from Hyde Road garage.

The trolleybus abandonment program began to accelerate in the 1960s and on 19 July 1964, most of the Manchester trolleybus workings on route 218 (a joint route with Ashton) were converted to motorbus operation and 1344 was one of the first of the B.U.T’s to be withdrawn from service at that time. Initially it was stored at Birchfields Road garage and was subsequently purchased by Martin Ford on behalf of the newly formed Manchester Trolleybus Preservation Society in 1965.

After a few months 1344 had to be moved, and was towed to open storage at a yard in Denton. In February 1966 it was taken to outside storage at a dairy at Hazel Grove, but this was most unsuitable, 1344 receiving a broken window within a few days of arriving. Fortunately, the General Manager at Oldham Corporation, Harry Taylor, then offered the MTPS a covered space in the Oldham depot, and 1344 was moved there in March 1966. Whilst there the MTPS members were able to keep 1344’s paintwork in good condition, and special 'last day' posters were applied so she could be used on the final day of the Manchester system - 31st December 1966. Indeed, 1344 was to be the very last trolleybus to operate in Manchester, driven by Samuel Ford, Martin’s father.

1344 returned to Oldham following the Manchester closure, but in 1967 it had to be removed from there at short notice. Fortunately Mike Dare, then Secretary of the Reading Transport Society (RTS) was able to offer a space in the old Chapel at Belton in Lincolnshire that he had just acquired. The Northern Trolleybus Society, as the MTPS had become, merged with the RTS at that time and 1344 became an RTS vehicle.

1344 remained at the Westgate chapel until 1973 when it was transferred to The Trolleybus Museum at Sandtoft. Two Manchester trolleybus enthusiasts, Mervyn Ashton and Ray Henton, took a keen interest in 1344 and in July 1975 took her back to Lancashire in order to carry out restoration work. 1344 was eventually restored to working order at the Black Country Living Museum in 2004, by which time Mervyn Ashton had died: Ray Henton subsequently passed away in 2006, by which time 1344 had been transferred to the East Anglia Transport Museum, at Carlton Colville (near Lowestoft) pending the ownership of the vehicle being resolved.

After an extended period of discussions 1344 is now back under the ownership of the BTS. It was towed from Carlton Colville to Thamesdown Transport's depot in Swindon on Sunday 21 November 2010 for restoration work to be carried out.  This work included both an internal and external repaint and complete refurbishment of the seats.

Thamesdown Transport carried out an excellent job on restoring 1344 and on 12 March 2011 she was towed to The Trolleybus Museum At Sandtoft for tidying up jobs to be completed. On 29 May 2011, 1344 was re-commisioned back into service and now operates regularly at the museum.