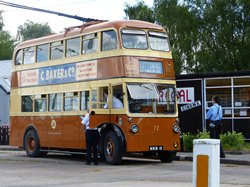 The Maidstone trolleybus system opened on 1 May 1928, gradually replacing the town's tramway network. By UK standards it was a small system with just two routes and a maximum fleet of only 24 trolleybuses. It was the only trolleybus system oin Kent outside Greater London and closed in 1967.

Three former Maidstone trolleybuses are now preserved: two at Sandtoft and the other (which was originally new to Brighton Corporation) at the East Anglia Transport Museum, Carlton Colville, Suffolk.

Maidstone Corporation took delivery of 12 Sunbeam trolleybuses numbered 62 to 73 in 1947. The chassis were to Sunbeam's wartime design (the chassis type W4 denotes Wartime 4-wheeel) and were fitted with attractive 56-seat composite bodies by Northern Coachbuilders of Newcastle upon Tyne.

72 seems to have lead a fairly uneventful life until its last weeks in service when it was fitted with illuminations to become Maidstone's last trolleybus on 15 April 1967. Whereas the rest of the fleet was then sold off - and most scrapped - Maidstone Council retained 72 for display in a local Museum. However this plan came to nothing and in 1977 it was placed on loan to the Trolleybus Museum; subsequently it was purchased from the Council for £1.

Whilst still in Council ownership 72's "cherished" registration number of HKR 11 was transferred to a Maidstone Borough Transport coach. Although it carries its original number plate on Museum premises the trolleybus has had to be re-registered with the DVLA as AFE 131A.

72 is a regular performer at Sandtoft. Because of its pleasant handling characteristics it is the usual choice for our Trolleybus Driving Experience days.