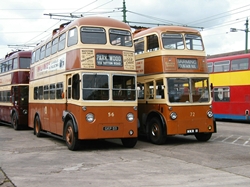 The Maidstone trolleybus system opened on 1 May 1928, gradually replacing the town's tramway network. By UK standards it was a small system, with just two routes, and a maximum fleet of only 24 trolleybuses, and the only one in Kent outside Greater London. It closed on 15 April 1967.

Three former Maidstone trolleybuses are now preserved, two at Sandtoft and the other (which was originally new to Brighton Corporation) at the East Anglia Transport Museum, Carlton Colville, Suffolk.

56 was delivered to Maidstone Corporation in 1944. It originally carried a wood-framed Park Royal 56-seat body to Utility style. As was common with Utility bodywork this wore out long before the chassis, so in 1960 it was sent to CH Roe of Leeds for new bodywork. Compared to the original, the Roe body has an additional row of four seats upstairs and two more seats in the lower saloon; to permit this whilst maintaining reasonable passenger legroom, the front bulkhead between the saloon and the cab is positioned further forward than normal. In turn this means that the driving seat is closer than usual to the steering wheel which makes driving an uncomfortable task for larger drivers!

When withdrawn from service 56 was sold to private owners who had intended to use it as a clubroom. However it toured the Cardiff trolleybus system in 1969 and was subsequently stored in Sussex until arriving at the Museum in 1982.

56 has been fully restored to 1960 condition, carrying the slightly unusual but attractive Maidstone livery of the time, and runs regularly at the Museum.