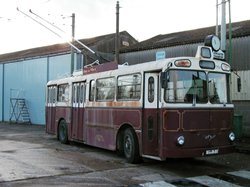 The Lyon trolleybus system was the largest in France. By the late 1950's the bulk of the fleet were 125-passenger three-axle Vetras but a requirement for smaller two-axle buses resulted in a batch of 20 of the smaller Vetra VBH85 model being delivered in 1963/4, of which 1704 is representative.

Soon after they arrived some routes were converted to motorbus, but the Oil Crisis of 1973 prompted a change of policy and Lyon has retained its remaining trolleybuses. In particular the winding line 6 to Croix Rousse was not considered as suitable for motorbuses so 7 of the VBH85s, including 1704, were renovated and repainted in a heritage livery. They continued in service until 1999. 1704 then went into store as a reserve fleet vehicle until 2006, arriving at Sandtoft that September.

Unfortunately 1704 deteriorated whilst in store and is now in need of considerable attention. It can be viewed if accompanied by a member of the Museum Staff.