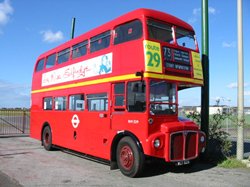 Possibly the most famous bus of all time, the Routemaster was designed by London Transport engineers in conjunction with AEC and Park Royal. It had many advanced features for its day including lightweight integral construction without a separate chassis, independent rear suspension, power-hydraulic braking, power steering and an automatic gearbox. LT bought 2,760 Routemasters; 65 forward entrance examples were supplied to British European Airways for the service to Heathrow Airport and 50 to Northern General.

When the project was initiated the vehicle was designed to be either a diesel-powered motorbus or a trolleybus. The decision early in the process to abandon the London trolleybus system meant only the diesel version was developed further, the intention being that the Routemaster would be the primary trolleybus replacement vehicle. However, although the prototype entered service in 1956, volume production was delayed and the massive service cuts following the disastrous London Bus Strike of 1958 rendered large numbers of RT types surplus to requirements, so these were used in the early stages of the Buses For Trolleybuses programme until Routemaster production got into stride.

Whilst most Routemasters had AEC engines some had the Leyland 0.600 unit of 9.8 litre capacity, but all other running units were of AEC manufacture. Bodywork on all but one RM was by Park Royal Vehicles. RM 529 has the AEC AV590 engine and was delivered from the builders in October 1960 but stored until entering service from the Hanwell depot on 9 November when that depot's trolleybuses were ousted. It was displaced to Cricklewood garage in 1967 by the longer RML type; there were 5 more inter-garage transfers until it became one of the first Routemasters to be withdrawn from service. Unlike many surviving Routemasters it has therefore never been modernised and remains in original condition.

The vehicle is kept at one of the Museum's off-site storage facilities.