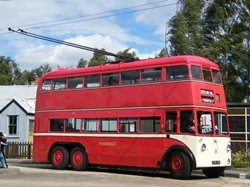 Huddersfield Corporation had replaced its trams between 1934 and 1940 with a fleet of 140 trolleybuses. As the trolleybuses themselves would become due for replacement from 1946 onwards, in 1941 the Corporation placed an order for 18 Karriers for delivery in 1946. The order was subsequently increased to 28 vehicles.

541 was both numerically the first and the first to enter service in 1947. It is a Sunbeam MS2 but badged as a Karrier; Karrier Motors had been based in Huddersfield until taken over by Sunbeam in 1933. The batch had Park Royal composite bodies of a rather utilitarian appearance, and perpetuated early 1930s practice with 2-step platforms and 3-piece upper deck front windows. Many of these early postwar wood-framed bodies needed rebuilding or replacing by the end of the 1950s. 541 re-entered service after a total rebuild in March 1960 retaining its upper deck window arrangement and blind layout.

After withdrawal it was handed over to the NTA and on 22 May 1966 it ran a tour over the Wolverhampton system, this making history by becoming the first preserved trolleybus outside London to operate under its own power and the first under “foreign” wires. It also operated the only tour by a preserved trolleybus in Huddersfield, on the last day of the system in July 1968.

Following a very generous donation from member David Beach in 1994, the restoration of 541 was commenced at Sandtoft. Every panel had to be removed and much rotten woodwork made good. The fully restored vehicle was launched into service at Sandtoft on 29 August 2010. It also ran at the St Leger Rally on 17 October and the Twilight Running Day on 14 November that year. In 2013 it visited the East Anglia Transport Museum and ran on their wiring circuit, the first time this century that one of the preserved Huddersfield trolleybuses has operated away from Sandtoft.

Huddersfield 541 regularly runs in service at the museum