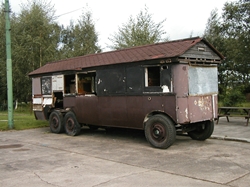 The Hastings trolleybus system once served the town of Hastings, East Sussex. Opened on 1 April 1928, it gradually replaced the Hastings tramway network, with the first route to be converted that from the Fishmarket to Hollington, and the last, the circular route. Tram replacement cost £1,383 per mile, but increased average speed from 7.5 to over 10 mph and cut costs from 13d to 10d per mile.

By the standards of the various now-defunct trolleybus systems in the United Kingdom, the Hastings system was a moderately sized one, with a total of 10 routes, and a maximum fleet of 58 trolleybuses. However, by May 1929 Hastings had 21 miles of trolleybus routes, then the longest in the world. It was closed relatively early, on 31 May 1959.

Maidstone & District Motor Services bought the Tramway Co. in November 1935, but didn't merge it until 1957. The livery changed from brown to green after the takeover, but the 'Hastings Tramways' logo remained until 1957. The power source also changed in 1936, when the tramway power station at Ore was replaced by municipal power.

Four of the former Hastings trolleybuses are now preserved. One is at the Trolleybus Museum at Sandtoft, Lincolnshire, and another at East Anglia Transport Museum, Carlton Colville, Suffolk. The remaining two, one of which was fitted with a diesel engine in 1959–60, are owned by the Hastings Trolleybus Restoration Group, Bexhill-on-Sea, East Sussex. The earliest is 1929 open top No.3, which was stored in 1938, but restored in 1952 to run summer open top services.

Number 46 [as it is believed to be] was sold to the Ministry of Defence at the end of the second world war. It was passed on to an ex-serviceman and his wife, who used it as a home until their deaths. The gentleman in question had worked on the Burma Railway under the Japanese.

The exact fleet number is not certain, as no trace of a painted fleet number can be found. The original chassis and body plates are long gone.

The old single decker remains in the condition that its inhabitants left it. If the finances were ever to become available, it would be restored as a home, in honour of its former residents.

The vehicle is easily seen at the Museum.