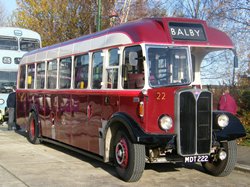 Number 22 was the first of a trio of 30-foot long AEC Regal III's purchased specially for the jointly operated Doncaster to Sheffield route. Their purchase allowed cascading and withdrawal of some of the Bristol L5G buses used on route 77 hitherto. Numbers 22/23/24 were amongst the last Regal III's built and the parts used in their construction had almost certainly been in stock for a long time previously. They had 9.6 litre engines with D162 crash gearboxes and were very sprightly performers.

When the Sheffield route was turned over to double-deck operation (with mechanically similar AEC Regent III 9613A's) the Regal III's were rebuilt at Roe's carriage works, at Crossgates in Leeds, to allow for one-man operation. Number 22 was thus rebuilt in March 1958. After that they worked on routes such as Jossey Lane and eventually number 22 became particularly associated with the Hexthorpe route.

22 was withdrawn from service in October 1965 with the intention of being used by the Education Committee but was reinstated as a PSV in December 1965. After being withdrawn for a second time, in October 1972, number 22 was placed on permanent loan by the Transport Department to DO&LRS, who had already adopted it some time previously as a special events vehicle. In the early days of its preservation it was rallied far and wide, traveling to the south coast and to eastern Scotland. Initial restoration (by the Transport Department) was to the later cherry red livery but it has now been restored to the scheme carried in 1958 when rebuilt as a one-man bus. For some years number 22 had lightweight seats but eventually it proved possible to reinstate the original high-backed units. In 2005 the ownership of number 22 passed outright to DOLRS.

This vehicle has recently had its engine and gearbox overhauled for the first time since entering preservation.

It can be viewed at the Museum.