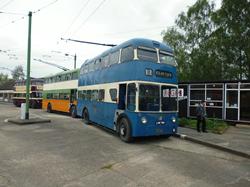 This was one of a batch of six vehicles new to Darlington Corporation Transport in 1949 as fleet number 72. Since the trolleybus system opened in 1926 only single-deckers had been operated, but these buses had double-deck East Lancs rear entrance bodies in anticipation of roads being lowered under some low bridges. By the time they were delivered it had already been decided to abandon trolleybus operation and in 1952 the six double deckers were sold to Doncaster Corporation for further service, this bus becoming Doncaster no. 382.

In 1959 the batch was sold to Bradford and stored. In 1962 one bus was broken up for spares but the chassis of the other five were rebuilt receiving new East Lancs forward-entrance bodies before re-entering service, in 834's case on 2 July 1962. They were all withdrawn in 1971.

Until recently, 834 ran regularly at the Museum. It is now in the process of being re-commissioned.