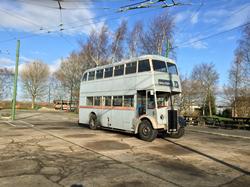 Bradford City Transport operated 45 Leyland PD2/3s, delivered in two separate batches in 1949/50. All were fitted with Leyland's own bodywork, initially seating 56 but increased to 59 in 1955.

558 was one of the first batch and after withdrawal was purchased by the West Yorkshire Transport Circle as a towing vehicle because it was in very good mechanical condition, unlike the body which was starting to deteriorate. For many years it was used for the collection and delivery to Sandtoft of trolleybuses earmarked for preservation.

After its active towing days ended 558 lay unused and deteriorating further until Geoff Welburn of Leeds purchased it. Its restoration has involved virtually a complete rebuild. Apart from the roof every body panel has been replaced. Structurally, five of the lower deck pillars had to be replaced as some had almost disappeared! Work continues on painting, starting with the roof which has been filled, primed and undercoated.

Although currently still requiring a lot of work to complete its restoration 558 can be viewed at the Museum.