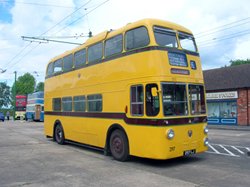 With 30 MF2Bs already in service, the Council decided to order another 10 for delivery in 1961. All had Weymann bodies based on the company's "Aurora" design. At the beginning of July 1961 nine of the new MF2B chassis had been delivered to Weymann's when a fire in the trimming shop caused extensive damage to the premises and three of the chassis, which were returned to Sunbeam for repair. One (which would have been 300) was considered a write-off.

The depleted batch was numbered 295 - 303. They were registered 295 LJ - 303 LJ and were the only trolleybuses in mainland Britain to carry "reversed" registrations. 301 was the last to be delivered, on 12 October 1962, and on 1 November was the last new trolleybus to enter service in the UK.

A few months after these trolleybuses entered service a new manager recommended that the trolleybus system be run down and eventually closed. The Council accepted his report and it was expected that trolleybuses would run for another 10 - 15 years, but in fact closure came on 20 April 1969, with 301 being the final trolleybus to operate.

The Bournemouth Passenger Transport Association purchased 301 for preservation in July 1969 and later also bought sister vehicle 297. Both vehicles had many different homes; for a while 301 was at the West of England Transport Collection. 297 came to Sandtoft for repairs and repaints following a low bridge accident on the continent and was operated for a couple of years until moving on again.

In May 2016 the British Trolleybus Society in partnership with the Trolleybus Museum at Sandtoft concluded an agreement with the BPTA to transfer ownership of 297 to Sandtoft Transport Centre Ltd and 301 to the BTS for the nominal sum of £1 each to ensure that the vehicles had a secure future.

297 runs regularly at the Museum.