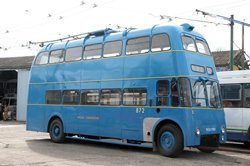 Special permission had to be obtained to operate these vehicles because they were 30 feet long on a two-axle chassis and therefore the first double deck buses to be built to these specifications. They were also equipped with automatic acceleration equipment.

These type of vehicles were often referred to as ‘gold fish bowls’ owing to their unusual bodywork design. The design was an attempt to produce a streamlined appearance whist at the same time keeping down both the costs and weight. They were also known as 'growlers', as the double reduction transmission was prone to being somewhat noisy.

872 saw 14 years service and was decorated as Walsall’s last official trolleybus in 1970. Along with sister vehicles 862 and 864 she was purchased for preservation. 872 was a regular runner at Sandtoft in the early years but mechanical problems began to occur and it was taken out of service. In 1993 872 was transferred to the Aston Manor Road Transport Museum to be used in their static display. in June 1994 872 took part in the Trolleybuses Galore event at the Black Country Museum (on demonstartion runs only) along with resident vehicle Walsall 862. In recent years Roy Pearce, Colin Page and Neil Preston have restored 872s interior on both decks. The only internal job outstanding is to re-upholster all the seats.

872 returned to Sandtoft on 22 May 2011 to take part in the BTS's 50th anniversary celebrations following which on 20 December 2011 it was then taken to Swindon where restoration was completed. It returned to Sandtoft on 10 January 2013 and had a major mechanical overhaul. It was the intention to re-commission 872 into serrvice at the Museum over the 2013 August Bank Holiday but due to a problem with the brakes which proved difficult to solve, she operated on demonstration runs only. Subsequently 872  had considerable work done on its hydraulic braking system. and ran for some months during 2018. However further mechanical problems have manifested themselves, and the vehicle is awaiting attention before it is returned to service at the Museum. It is still, however, available for viewing.