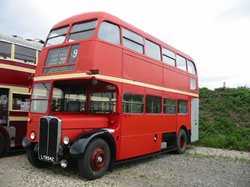 There were 4,825 buses in London Transport's RT class, all with AEC chassis and bodywork sourced from a variety of companies. RT1 had entered service in 1939, followed in 1940 by 150 more with bodies built by LT themselves at Chiswick before war intervened. Production re-started in 1947, ending in 1954 with the type lasting in London service until 1979. Although built to a standard design to allow maximum interchangeability of parts there were minor variations and RT3323 was classed by LT as type 3RT8.

RT3323 has an AEC 9.6 litre engine and when new had a Weymann body. At its 1968 overhaul it received its current Park Royal body. During its life in the capital it was allocated initially to Plamers Green garage, then worked successively at Hendon, Edgware and Catford garages before returning to Palmers Green after the 1968 overhaul. Subsequently in 1973 it moved to Upton Park and finally Sidcup.

After withdrawal it was bought for non-psv use by a company in Portsmouth. By 1984 it had passed to the well-known dealer Brakell in Cheam who sold it to a community centre in Guildford, who used it as a coffee bar. In 1990 it passed to St Peter's Church in Conisbrough, South Yorkshire where it became a playbus called "Barney the Bus". In 2004 it was donated to the Trolleybus Museum.

Some considerable work was done to the vehicle before trolleybus projects were deemed to take precedence, including fitting a full set of seats and removing the temporary platform doors. Work has recently (2020) re-started on completing this project.