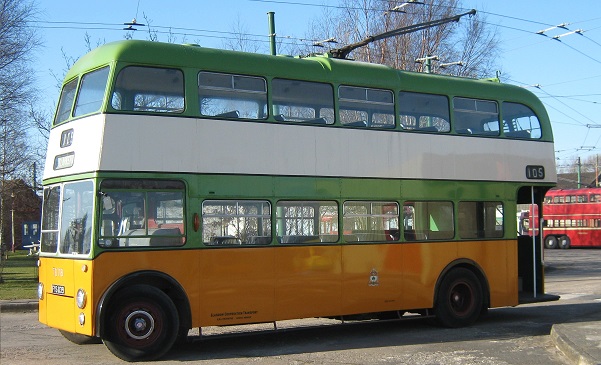 Glasgow was the last trolleybus system to be inaugurated in the British Isles, the system opening on 3 April 1949. In the first three years five routes had been opened, with most services replacing parts of the once extensive tramway network.

With the planned introduction of three new trolleybus routes in 1958, 106 (Millerston or Riddrie and Bellahouston), 107 (Muirend and Maitland Street) and 108 (Mount Florida and Paisley Road Toll, Linthouse or Shieldhall) a total of 90 BUT 9613T trolleybuses with Crossley bodywork were purchased and entered service between July 1957 and December 1958. TB78 entered service on 25 March 1958.

The BUT 9613T was an extended version of the tried and tested 9611T, being designed for bodywork up to the recently permitted 30 ft length on two axles and based on the AEC Regent bus chassis. The Glasgow order were the last chassis built in the former Crossley Motors factory at Errwood Park, Stockport (AEC had bought out Crossley 10 years previously). The bodywork was to Park Royal design; Park Royal was by that time also a member of the ACV Group, like AEC and Crossley. Industrial relations at Stockport were deteriorating by that time and before all the Glasgow buses were completed AEC took the decision to close the plant. Bodies in build were completed at Park Royal and those not started were built from scratch there. Consequently, some chassis and part-finished buses were towed from Manchester to London then back north to Glasgow before they'd turned a wheel in service!

The Glasgow trolleybus system only lasted a total of 18 years and TB78 was less than 10 years old when withdrawn from service following the last day of trolleybus operation on 27 May 1967. During its short lifetime TB78 was the only vehicle of its class to have had three different liveries and it was also based at three different depots throughout its life i.e. Dennistoun, Govan and Hampden.

Following the abandonment of trolleybus operations in May 1967 Glasgow TB78 was purchased for preservation by the then Reading Transport Society. The reason for choosing TB78 was because it was seen to be the vehicle in best condition. It is the only Glasgow double-deck trolleybus in preservation.

TB78 was a regular runner at Sandtoft over the years although more recently it was taken to the Reading area to have the bodywork and mechanical gear restored. The bodywork was repainted in 2000 and TB78 returned to service at Sandtoft during the Spring Bank Holiday in 2001.

Currently TB78 is awaiting some work to allow it to return to service. It is however available for viewing at the Museum.