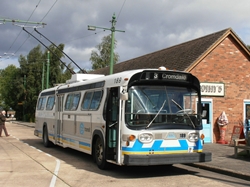 Trolley bus service in Edmonton started on September 24, 1939, operating on route 5 from 101 St/Jasper Ave to 95 St/111 Ave. By the end of October of that year, service had started on another route running to 99 St/Whyte Ave via the Low Level Bridge. In Edmonton, trolley buses were often referred to simply as "trolleys".

The trolley bus system used a mixture of Ohio Brass and K&M Elastic (Swiss) suspension for holding up the overhead wires.

The 49 vehicles remaining in use in 2008 were from an order of 100 manufactured in 1981–82 by Brown Boveri & Company (BBC), using bodies and chassis supplied to BBC by GM. These 100 vehicles for Edmonton were the only trolley buses ever built with the GM "New Look" body, whereas more than 44,000 motor buses were built to that design.

In 2007, a low-floor model of trolley bus was leased from Coast Mountain Bus Company, Vancouver's bus operating company, for a one-year period, for testing of possible benefits of low-floor trolley buses over hybrid diesel buses. During its time in Edmonton the bus was numbered 6000, but its Vancouver number, 2242, was restored when it returned to there.

On June 18, 2008, city council voted 7 to 6 in favour of phasing out the trolley bus system in 2009 and 2010. However, city council decided in April 2009 that trolley bus service would be discontinued earlier than originally planned, in order to reduce the city's expected $35 million deficit in 2009. The last day of service was May 2, 2009.

Edmonton 189 resides at the main Museum, and was purchased for one Canadian Dollar. When the bus arrived, and the interior was given a thorough clean, a one dollar coin was found, unexpectedly off setting the cost of purchase.

The vehicle can be viewed at the museum, but is suffering from a number of electrical and air brake problems.