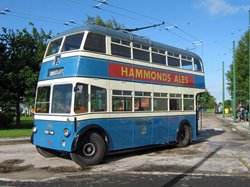 746 was delivered in early 1949 as part of an order for 20 Weymann-bodied BUTs. These turned out to be the last completely new trolleybuses purchased by Bradford Corporation, none of which were rebodied; all subsequent purchases were secondhand. Due to pressure of work Weymann asked to sub-contract the bodywork for the first twelve, including 743 and 746, to CH Roe of Leeds which at that time was not one of the Corporation's usual suppliers.

The Roe-bodied batch was placed in store and not licenced until December when it replaced Bradford's last trams on the Bradford Moor service, which at the same was linked across the city centre to the existing Crossflatts via Bingley and Saltaire trolleybus route. Having a high-than-normal rated motor in only a 2-axle bus gave these vehicles impressive acceleration and they easily coped with the steep climb past Bradford Cathedral: few 3-axle trolleys at the time had such large motors.

The entire batch of 20 were initially allocated to Saltaire Depot - on the line of route - thus becoming known as the "Saltaire BUTs". 746 spent virtually its entire operational life there, only being transferred elsewhere when the Crossflatts - Bradford section was being prepared for conversion to motor buses.

Withdrawn from service in November 1963, 746 was again placed in store to re-emerge in 1966 as driver training vehicle 063. In this role it was used for the last Ministry of Transport trolleybus driver test in the UK on 30 July 1971, after which it was delicenced and sold for preservation.