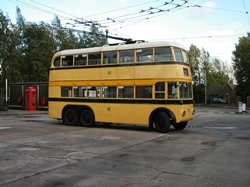 Trolleybuses were introduced to the streets of Bournemouth on 13 May 1933 when an experimental route between Bournemouth Square to County Gates, Westbourne was inaugurated. Four experimental trolleybuses provided the service and were also used for evaluation purposes. The trolleybus service proved to be so successful that it was decided to open up a number of other trolleybus routes over the following three years.

The most successful of the four trial trolleybuses proved to be the Sunbeam MS2 and between June 1934 and March 1936 Bournemouth took delivery of 102 more of this type of vehicle, one of which was 99 which entered service on 25 March 1935 following the opening of route 24, Bournemouth Square to Iford Bridge.

In 1937 and additional ‘tramcar style’ wooden-cased single-line indicator box was fitted to the top of the driver’s nearside cab windscreen. However, this was removed after the Second World War and the front rectangular intermediate and final destination indicator was moved up to edge against the maroon band at the top of the between-decks panel, and a single line auxiliary indicator added immediately below.

During the Second World War a number of 99’s sisters were loaned to other cities to help out, although 99 remained in Bournemouth.

A start was made on withdrawing these vehicles in 1951 and throughout the 1950s others were put in store. During 1958/59 Bournemouth took delivery of 30 new Sunbeam MF2B trolleybuses and all but 32 of the 103 Sunbeam MS2s remained in service after that time, which included 99. All trolleybuses were renumbered in the 200 series from 1958 onwards and 99 was renumbered 212.

212 survived in service until September 1963, after which the Reading Transport Society bought her for preservation. Since then, the bodywork has been restored to original Bournemouth condition and renumbered 99 again. It was electrically rewired which led to the discovery of a major traction motor fault. A second-hand motor was purchased and fitted. Once the motor had been replaced and the electrics tested the brakes were overhauled and the bodywork was tidied up. She was then able to re-enter service at Sandtoft in 2003. You can look at some photographs of this work here.

In 2007, after four years of operation, it was decided to withdraw 99 again for the remainder of the restoration work to be completed.

A fund has been set up to cover the costs of the continuation of the restoration. This has allowed one of the resistance banks to be rebuilt and one or two other jobs to be completed. However, the body frame requires some work, as does the interior.